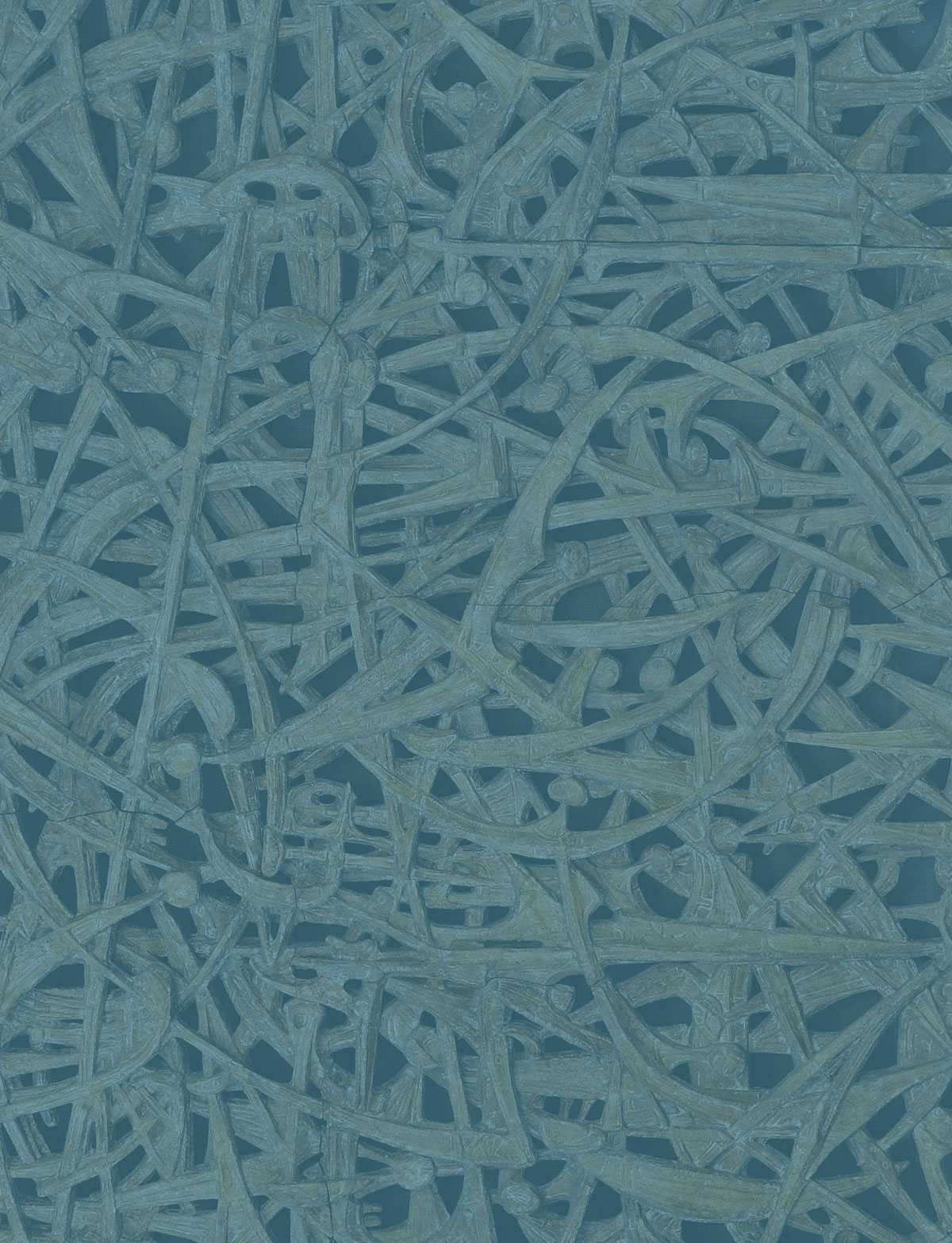 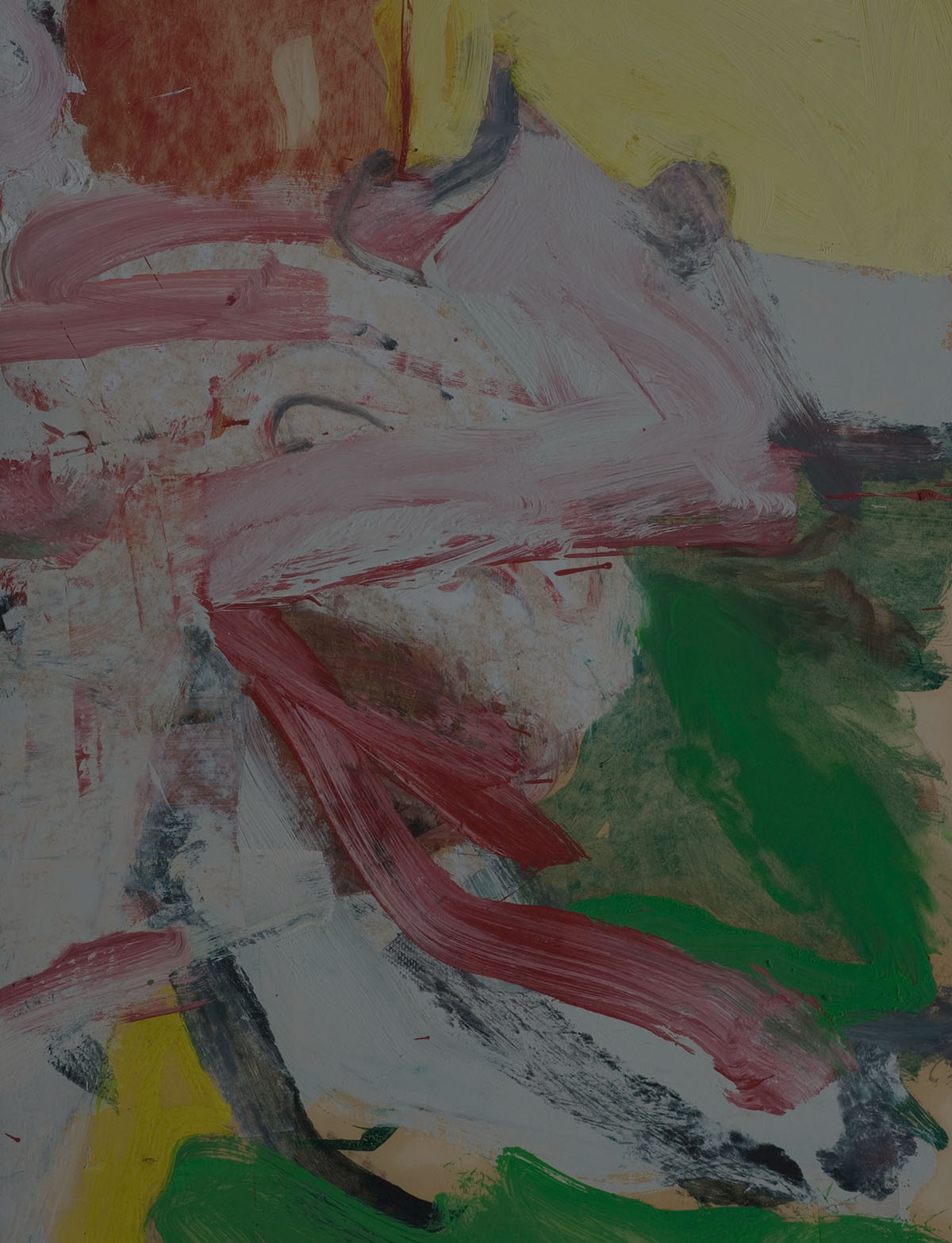 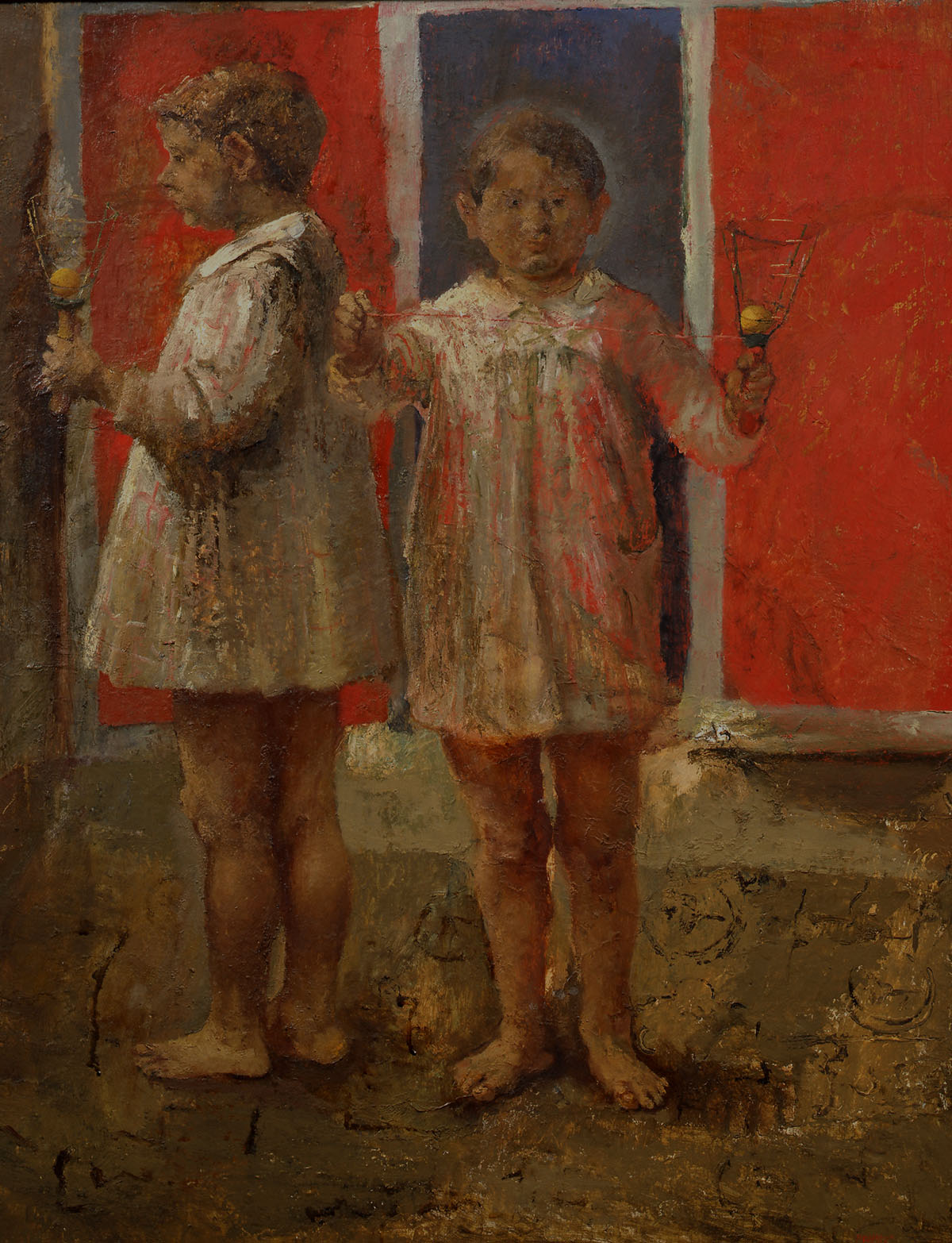 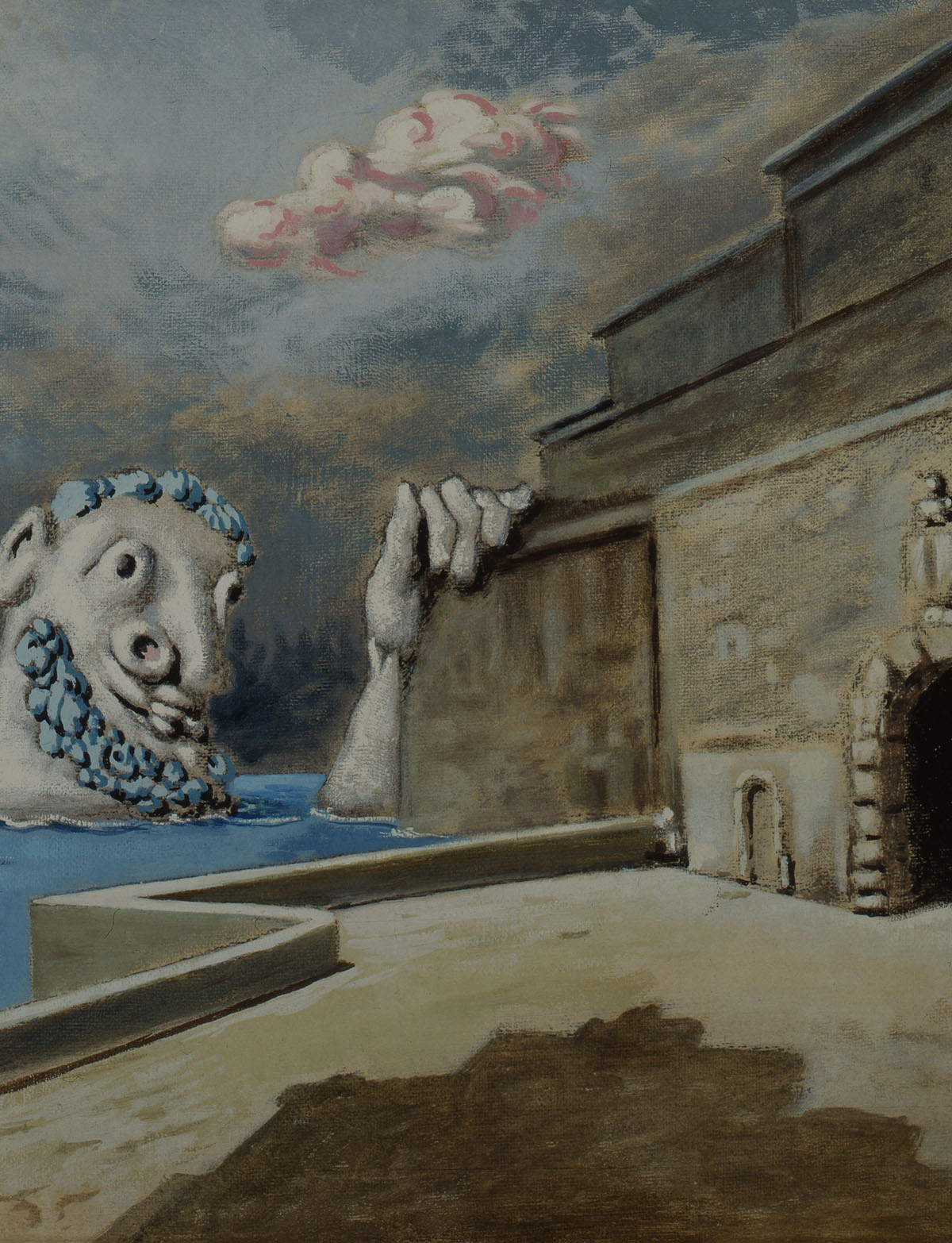 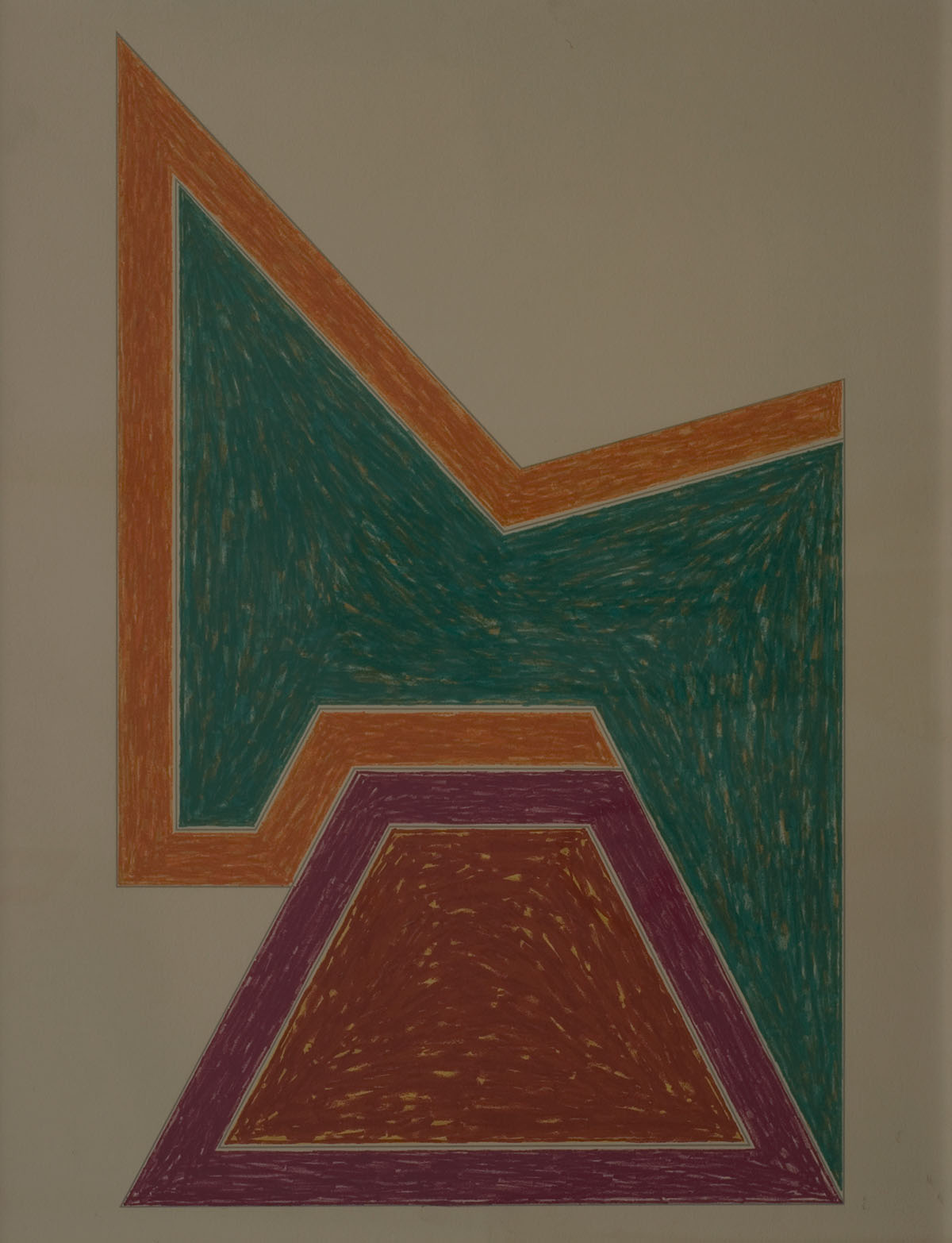 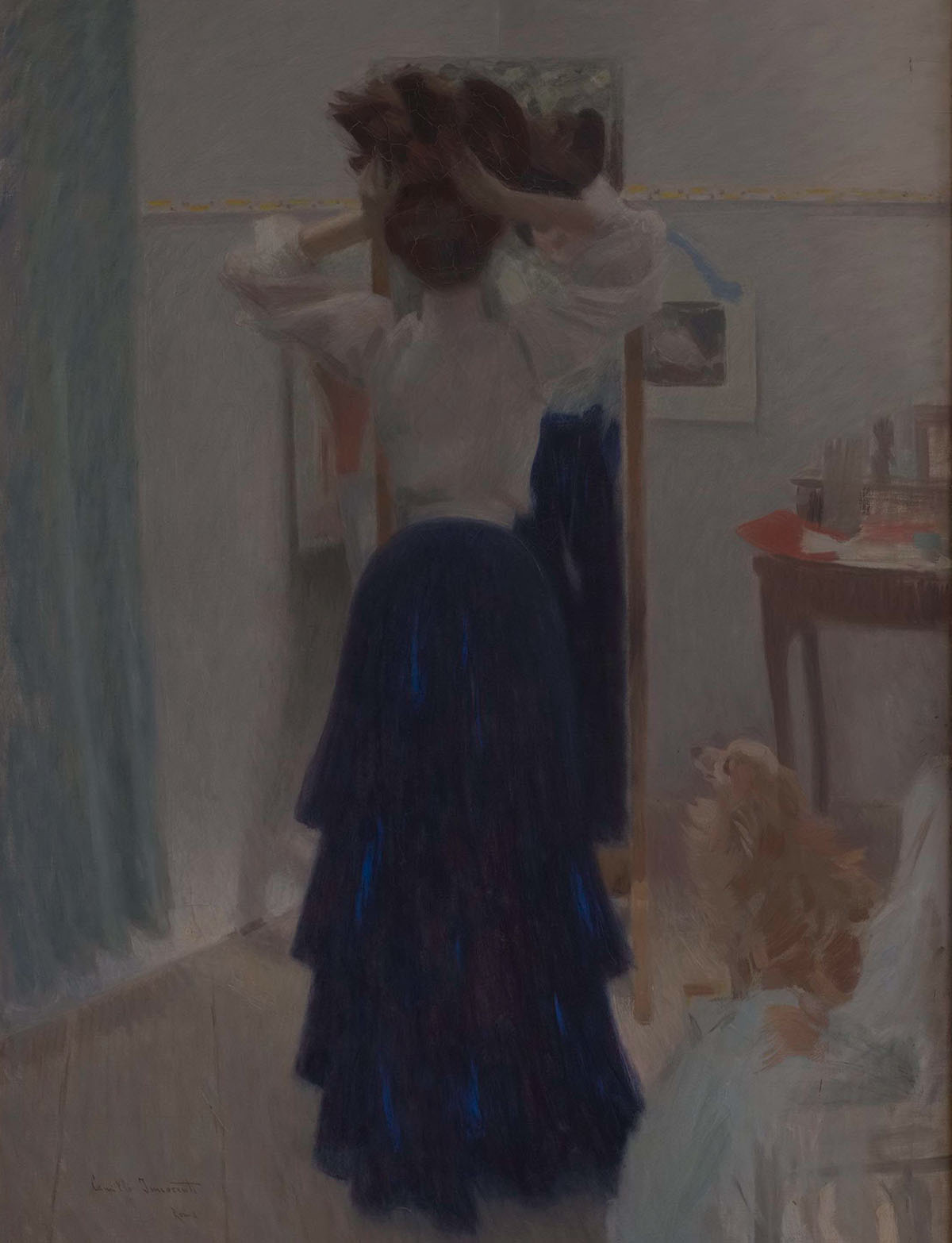 A new way of experiencing art

Casa Cavazzini is the site of the new Museo d’Arte Moderna e Contemporanea (Museum of Modern and Contemporary Art), located in the heart of Udine’s historic city centre. Bequeathed to the City Council by Dante Cavazzini, the building subsequently underwent a long period of restoration under the stewardship of the architect Gae Aulenti. When it opened to the public in 2012, Casa Cavazzini had been transformed into a fully functioning, modern museum. Since then, it has become a cultural power house, reviving the historical heart of the city.

The first and second floors host the museum’s permanent exhibitions, showcasing important collections of paintings and sculptures dating from the 1800s to the present day. The display and arrangement of this work have been completely renovated. The ground floor of the building is reserved for temporary exhibitions and other events.

Casa Cavazzini, home to Udine’s new Museum of Modern Art (Museo d’Arte Moderna e Contemporanea) is a result of the combination of several properties between Via Savorgnana and Via Cavour. Near 1540, the house (Casa Cavazzini) became Colombatti family (originally from Faedis) property. In the early 1900s, the last descendant of the family, Count Gustavo Colombatti, leased the ground floor to Dante Cavazzini (1890-1987). Cavazzini opened an discount upholstery shop on the premises.

Upon Colombatti’s death in 1937, Dante Cavazzini purchased the building, making it his residence. Renovated by architect Ermes Midena (1895-1972), the first floor was transformed into an apartment with necessary amenities. Some of these furnishings are still on view, including the murals by Afro Basaldella. The murals were commissioned in 1938 to decorate the walls and ceilings of several rooms.

Recent restoration work carried out on the first floor led to the discovery of secular frescoes dating back to the late fourteenth century. A beautiful sixteenth century Venetian-style water butt and pottery dating back to the early Iron Age (second half of the eighth century BC, making it the oldest artifact found at the Casa Cavazzini site) are on show on the ground floor of the museum. 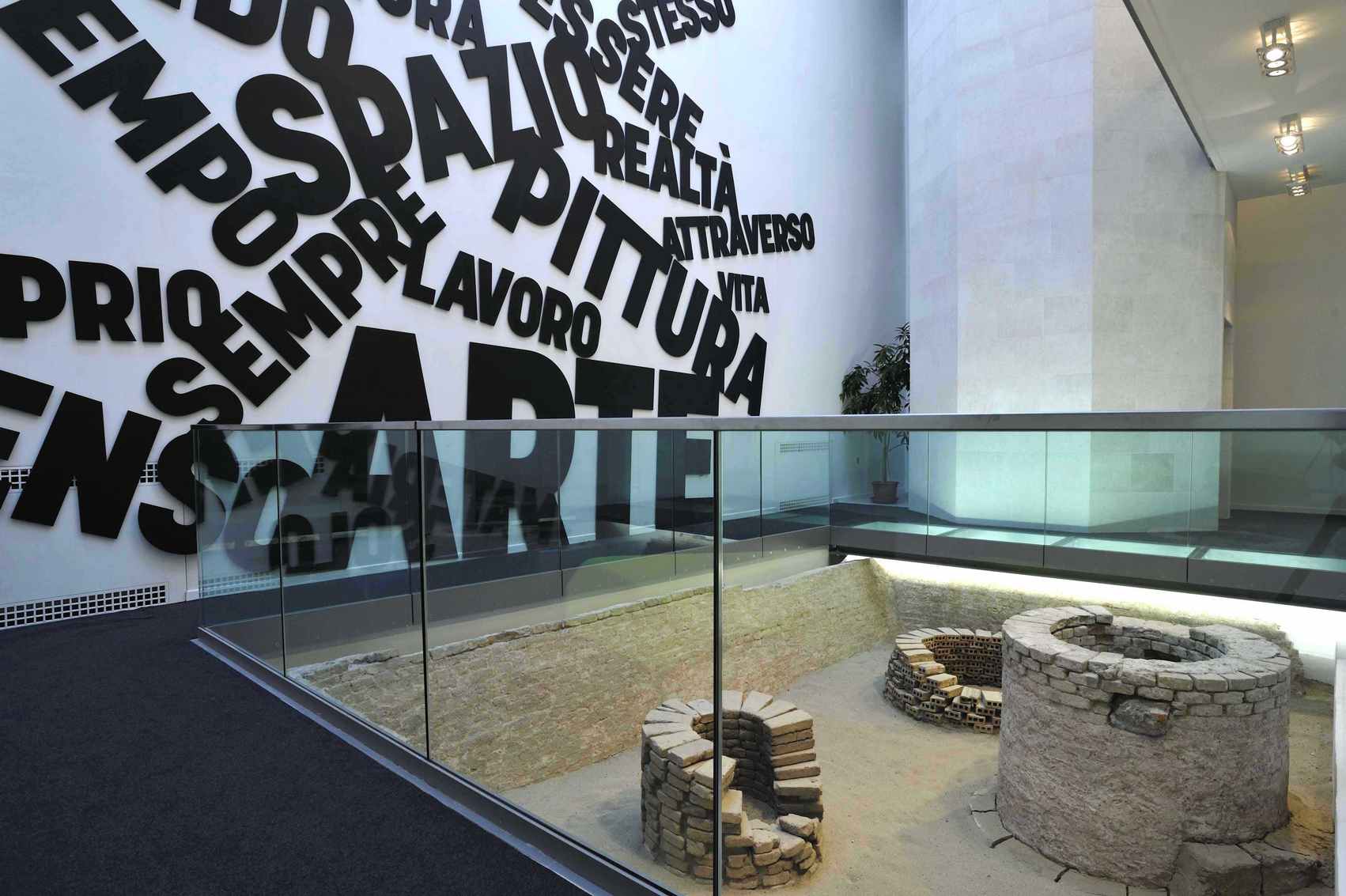 The spacious rooms on the ground floor are primarily used for temporary exhibitions although some works from the permanent collections are also displayed here. The atrium, for example, hosts the plaster model Cancellata per il Mausoleo delle Fosse Ardeatine a Roma created by Mirko Basaldella between 1948 and 1951, while the opposite wall exhibits the installation entitled In teoria, which was created by Marotta & Russo for the occasion of the museum’s opening (2012)

In addition to housing the Marangoni Collection, which contains works from the late 1800s to early 1900s, the first floor has a large exhibition space dedicated to the permanent Basaldella Collection, which showcases works by three Udine born artists - brothers Dino, Mirko and Afro Basaldella. A visit to the Cavazzini apartment completes the tour. 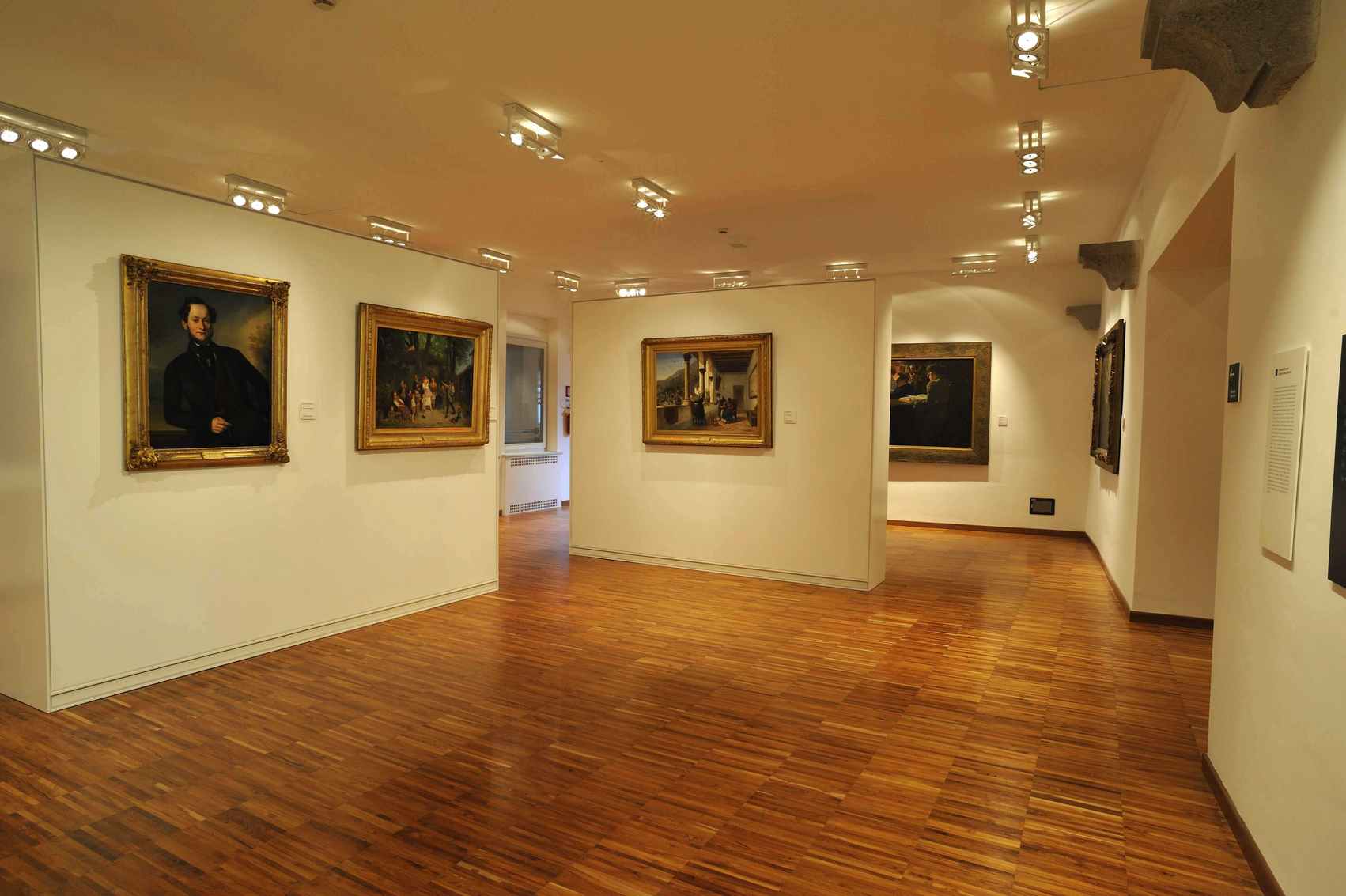 Displayed over a series of walls and panels, these paintings from the so-called Lascito Marangoni form the original nucleus of the city’s modern art collection and were acquired by virtue of Antonio Marangoni (1806-1885),  a wealthy merchant from Udine, who on his death bequeathed his estate to the City Council. Marangoni set out specific provisions in his will and testament, establishing that every year the City Council was to provide for the purchase of one or more works by promising young artists. The task was entrusted to the Fondazione Artistica Marangoni, established in 1895, which purchased suitable works from national and international exhibitions.  Thanks to these purchases, many prominent Italian painters found their way into the city’s art collection as did several foreign artists, with works by Giuseppe and Emma Ciardi, Plinio Nomellini and Felice Carena, sharing pride of place with those of Joaquín Sorolla y Bastida and Frans Holder. 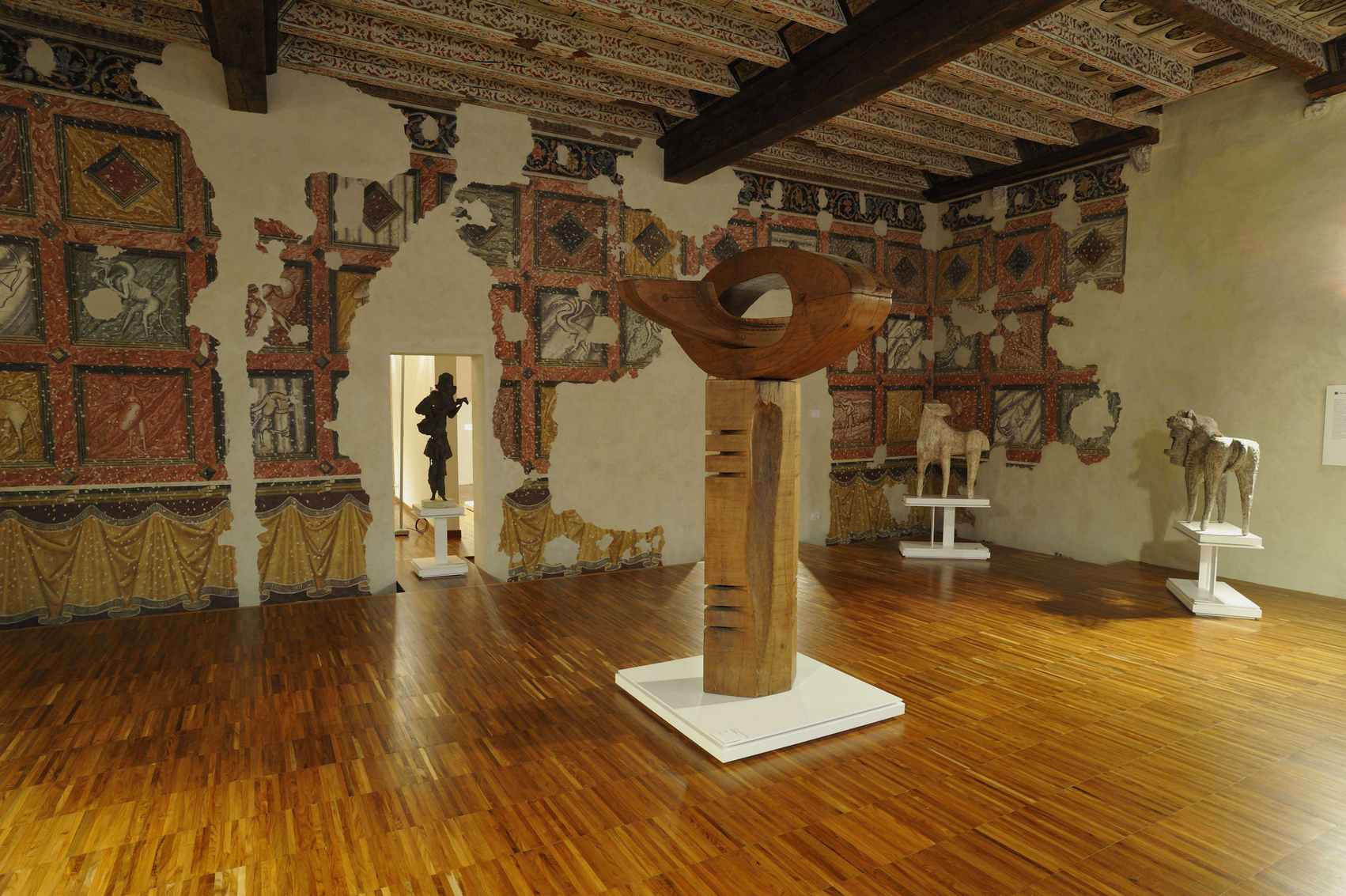 Two rooms on the first floor are dedicated to the work of the Udine brothers Dino, Mirko and Afro Basaldella. In the first, where recent restoration work brought to light valuable frescoes depicting secular subjects dating back to the late 1300s, there are several sculptures by Mirko (1910-1969) produced during the 1950s and 60s, such as Chimera Urlante (1956), as well as large totemic structures such as Il rostro (1964). The adjoining room showcases iron sculptures produced by Dino (1909-1977) during the 1960s, together with paintings by Afro (1912-1976), including his 1939 canvas Si fondano le città, a large, distinctly formal work both in composition and colour, the abstract painting Angelica (1964), as well as examples of paintings made shortly before his death. 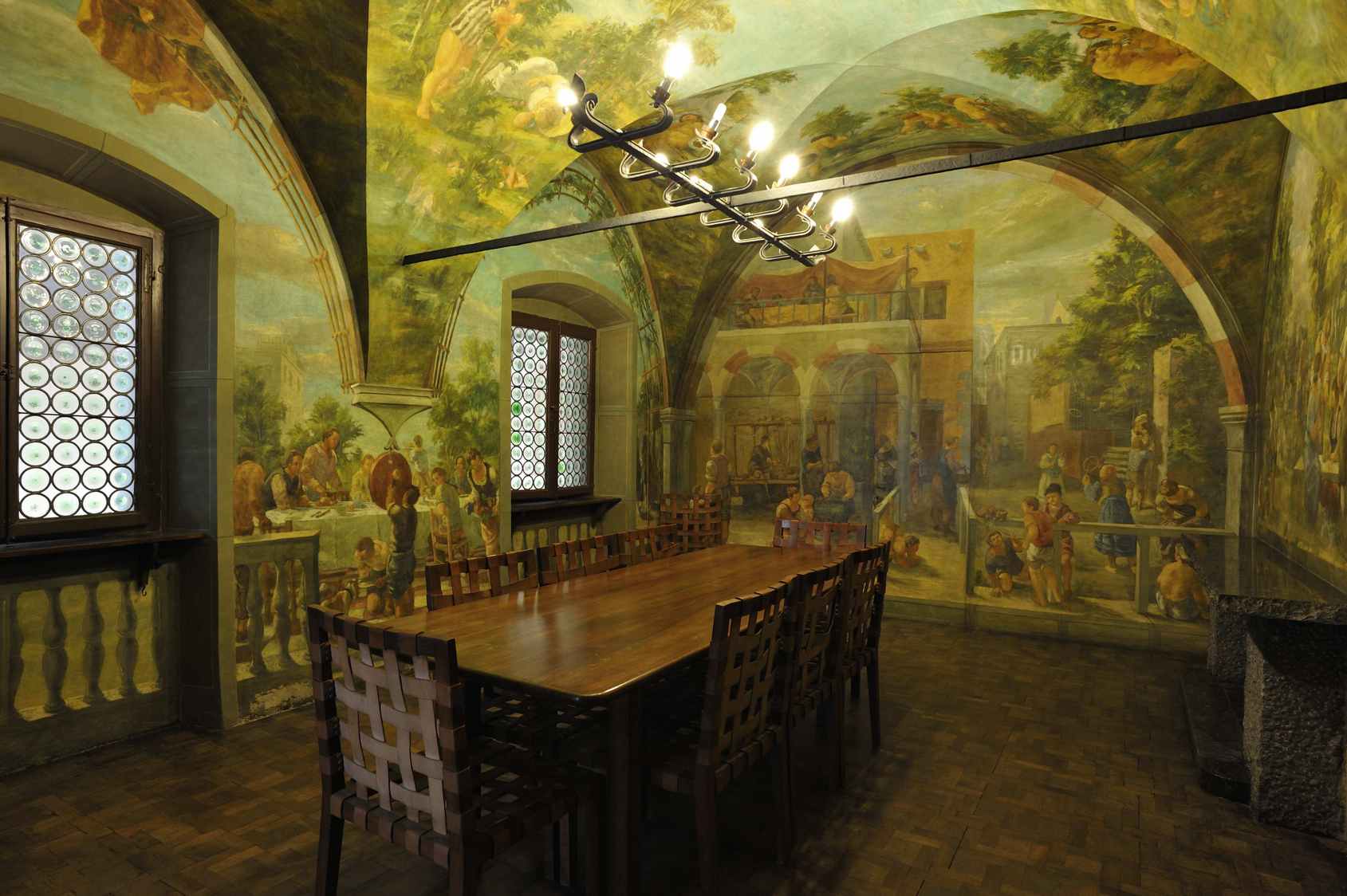 A tour of the first floor ends with a visit to what was once the apartment of Dante Cavazzini, which was renovated in the late 1930s by Ermes Midena (1895-1972) according to the principles of modern rationalism and whose interiors still display the original furnishings and wall paintings entrusted to Afro Basaldella in 1938. The dining room walls are entirely decorated with scenes of country and city life depicting people at work, leisure pursuits and entertainment, while the cross vaulted ceiling is decorated with putti and naked youth – here alluding to the liberal arts - painted against a scenic background. The technique employed is that of egg tempera, while the style is reminiscent of the grand decorations of sixteenth-century Venetian painting with some allusions to the Baroque style adopted by De Chirico.

The second floor hosts two important collections: the Astaldi Collection, with works by Italian and foreign artists dating from the 1920s to the 1960s, and the FRIAM Collection, which consists of paintings and sculptures by American artists of the 1960s and 1970s. 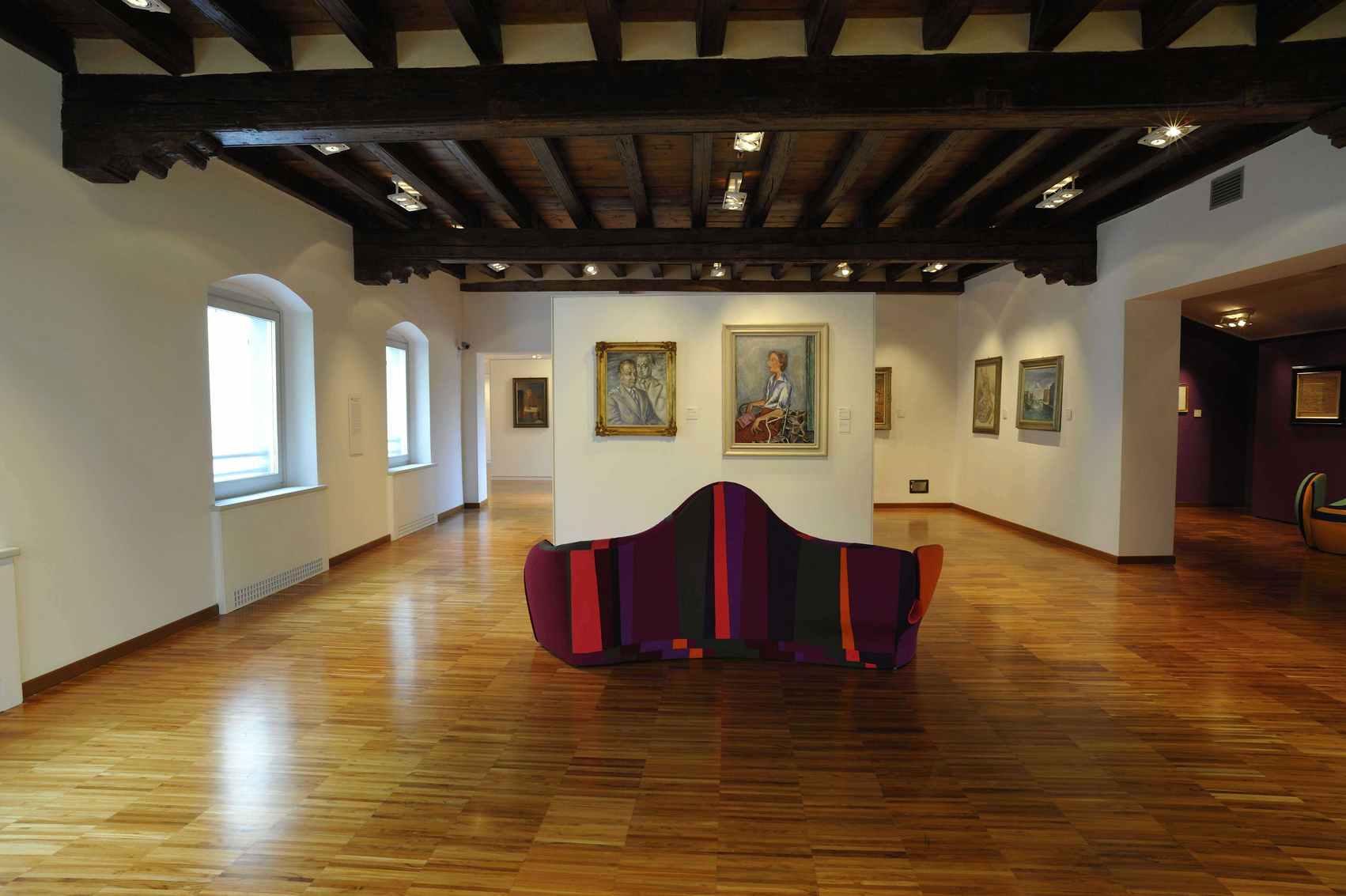 The Astaldi Collection is undoubtedly one of the museum’s most emblematic body of works.
Bequeathed to the city of Udine in the will and testimony of spouses, Sante Astaldi (Sannazzaro de 'Burgondi, 1895 - Rome, 1982) and Maria Luisa Astaldi (Tricesimo, 1899 - Rome, 1982). An engineer by profession, Sante Astaldi was one of the most prominent figures in the field of public works in the period following World War II, while Maria Luisa, an extremely cultured woman who, in addition to being a scholar and professor of English literature, also took a particular interest in art, as the number of works that make up the collection - over one hundred and ninety works in total – clearly testifies.

The exhibition runs over much of the second floor and occupies several rooms, each grouping works in accordance with the time of their acquisition rather than chronologically.

The first body of works is dedicated to acquisitions made in the 1930s when the collection first began to take shape, as testified by the paintings exhibited at the 1st Exhibition of Contemporary Art Collections (Cortina d'Ampezzo,1941). Among the artists presented are Giorgio De Chirico - with Gladiatori (ca. 1931) and Cavalli con rudere (1930), Alberto Savinio, Felice Carena and Ottone Rosai, a painter Maria Luisa Astaldi admired immensely. Other works acquired during the period include exhibits from the 1940 Venice Biennale, such as La Sirena (1940) and Il Ragazzo che Disegna (1938) by Gianfilippo Usellini and Nudo femminile (1928) by Mario Sironi, which was purchased from the Galleria del Milione in Milan.

In the latter years of World War II the Astaldi spouses purchased other works from private galleries in Milan and Rome, as well as from the Venice Biennale. These included paintings by Carlo Carrà, Filippo de Pisis, Capogrossi, Zeno Birolli, Giorgio Morandi, Renato Guttuso, and Alberto Savinio.

In the 1950s, the collection expanded with various acquisitions that testify to an interest in works from previous epochs, such as Mezza figura con vaso (1928) by Massimo Campigli and Natura morta con chitarra (1919) by Gino Severini. Particular attention was also reserved for members of the historical avant-garde as evidenced by the purchase of lithographs and numerous prints by Picasso, Braque and Marc Chagall, and, more significantly, to abstractionism, with acquisitions such as Ben Nicholson’s abstract-concrete work Painting (1940) and other abstract works by Toti Scialoja, Parigi (1950), and finally, Corrado Cagli’s, Bosco del Lemery (1950).

Among the latest acquisitions of the 1960s, the Informale paintings of Giuseppe Santomaso and Henley Regatta (1936) by Raoul Dufy deserve special mention. 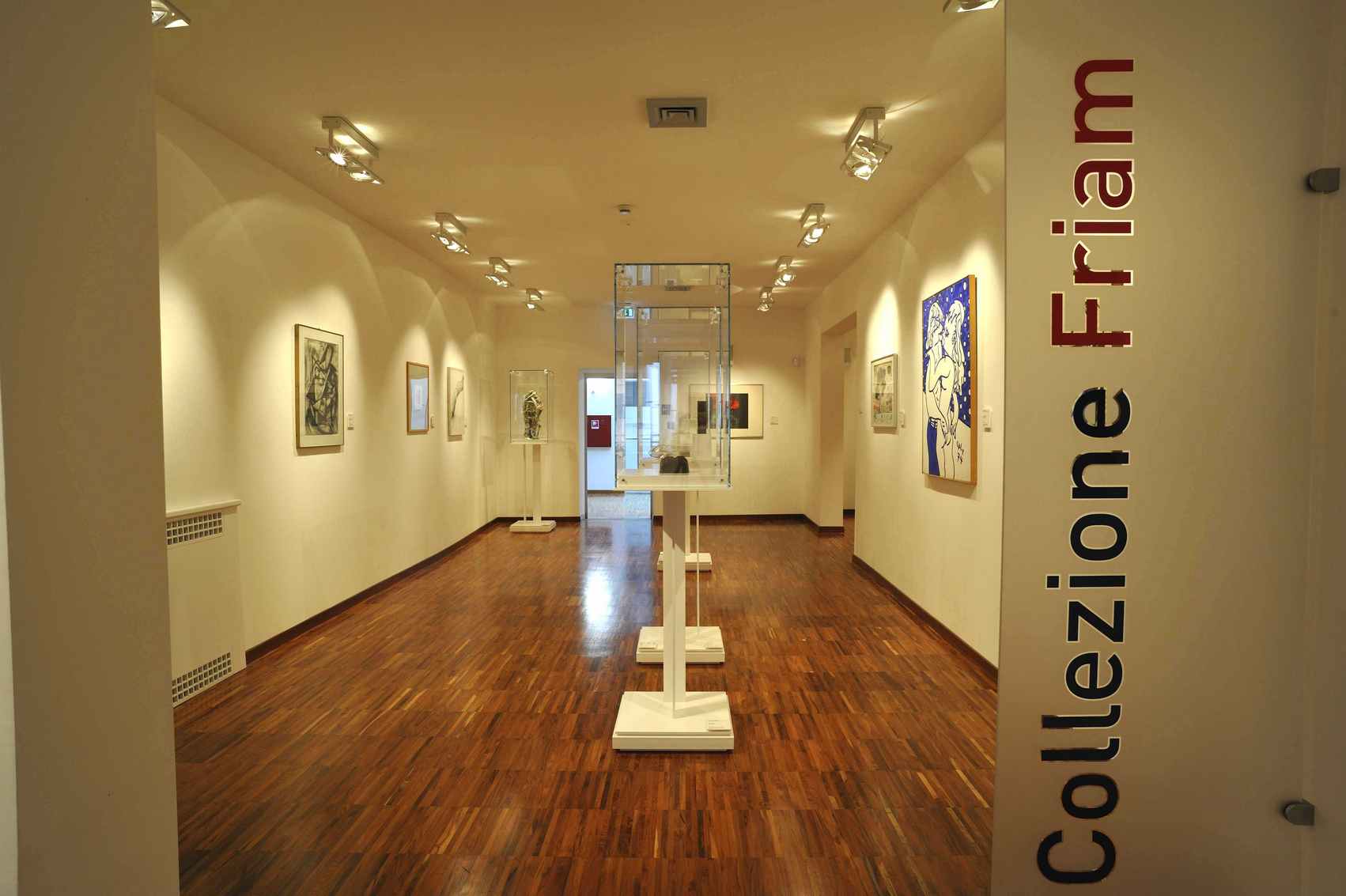 The second-floor exhibition space concludes with two rooms dedicated to the FRIAM Collection, a collection of American artworks initiated by the Italian-American committee, Friuli Arts and Monuments (FRIAM), in an act of solidarity with the Friulian people following the earthquake of 1976, which had devastated the region. That same year, a group of American artists, diplomats and political figures arranged for a number of donated artworks to be sent to Italy, the aim being for these to be sold at auction and the proceeds invested in reconstruction.
However, the then incumbent mayor of Udine, Angelo Candolini opposed the project and decided to keep the donated works intact, thus forming the collection that would later enhance the future Galleria d’Arte Moderna, in Udine. As a collection, it is unique within Italy, boasting truly rare examples of American painting and sculpture between the late 1930s and 1970s, such as works by Willem de Kooning, Roy Liechtenstein, Sol LeWitt, Donald Judd, and Frank Stella, to name just some of the artists represented.