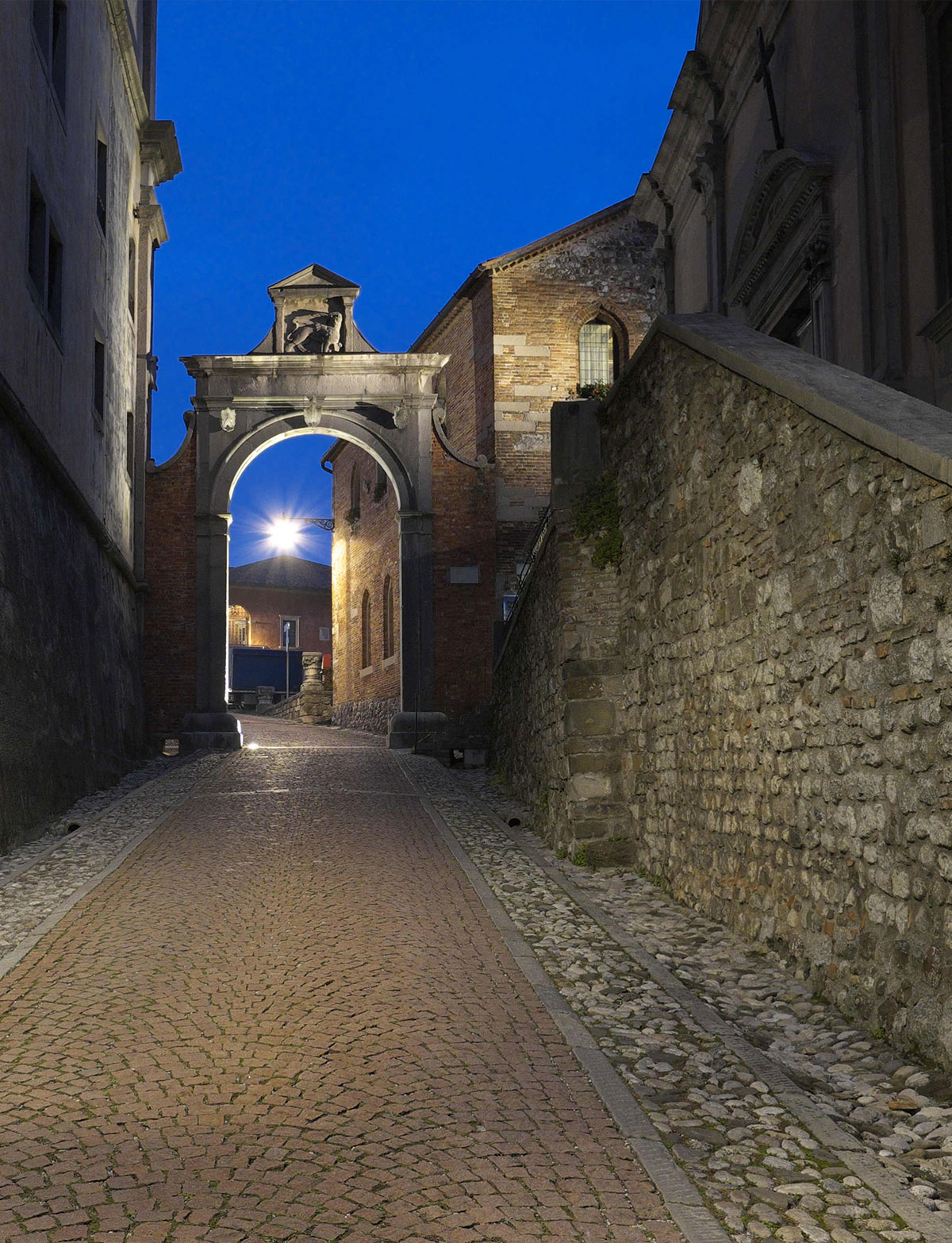 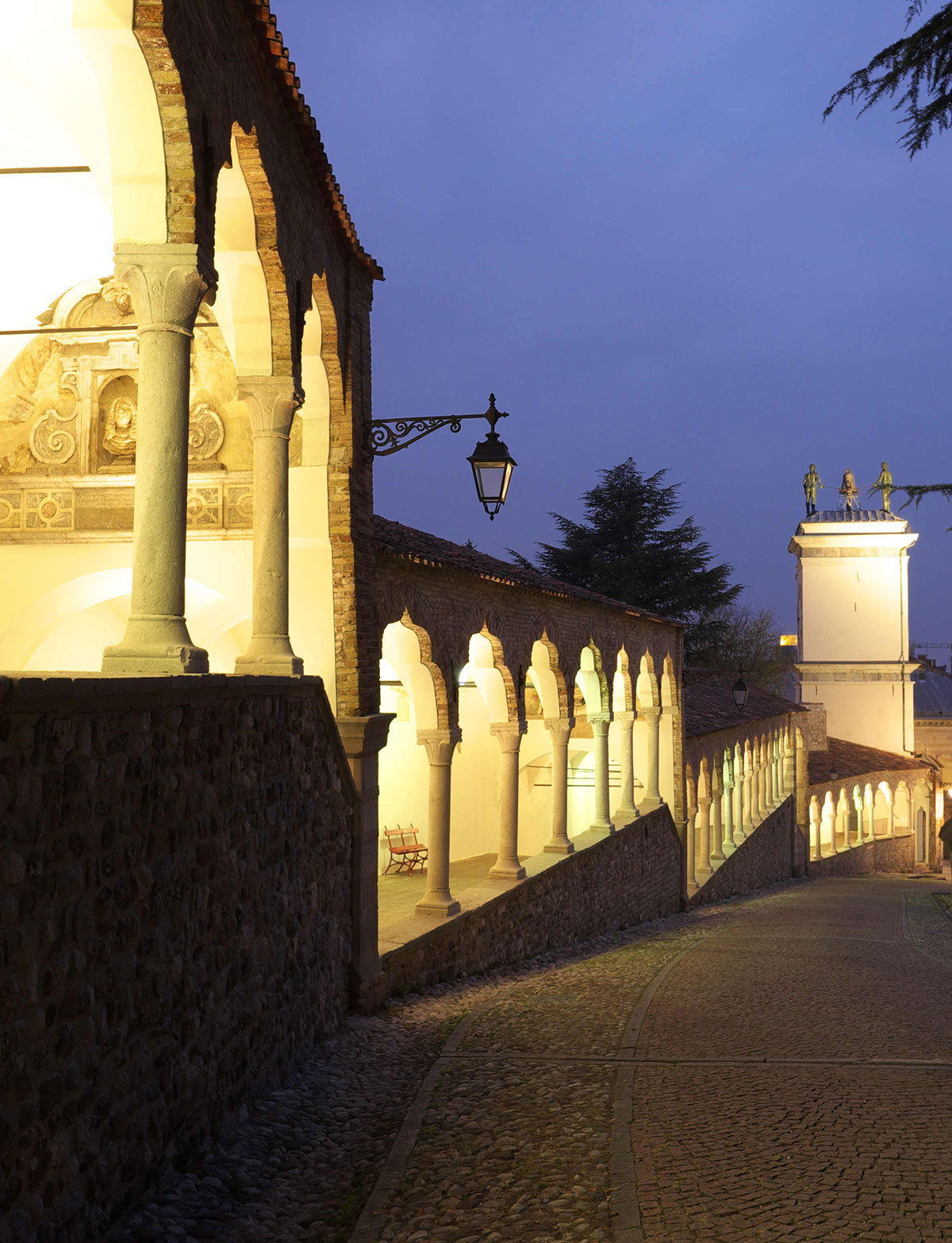 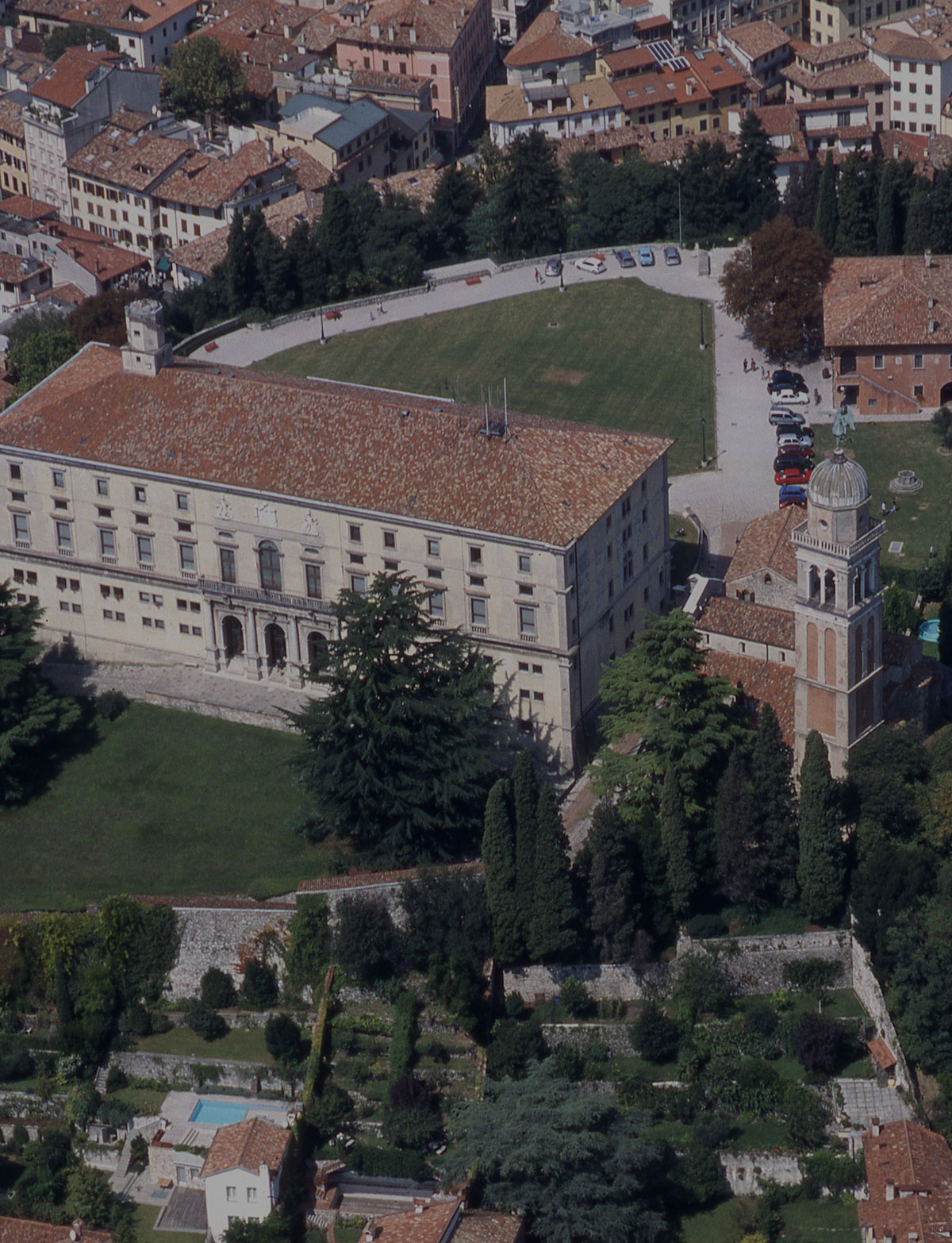 The road leading to the Castle

Aerial view of the castle

The Castle of Udine, one of Friuli’s most emblematic landmarks and once the seat of the Patriarch of Aquileia and the Venetian Lieutenant of the Patria del Friuli, became a museum on 26 July, 1906, on the occasion of celebrations to mark the fortieth anniversary of the unification of Friuli with Italy.

Today the ground floor of the castle is home to two recently opened museums: the Museo del Risorgimento and the Museo Archeologico. Planned and curated with fine attention to detail, both are equipped with innovative multimedia aids. Extending along the entire length of the main floor, the Galleria d’Arte Antica houses valuable works of art from the 1300s to the 1800s, including paintings by Carpaccio, Caravaggio and Tiepolo. The third floor hosts the impressive Museo della Fotografia which showcases the work of some of the most important photographers working in Udine during the nineteenth-century and twentieth-century such as Pignat, Bujatti and Brisighelli.

There are further collections that may be visited by appointment: the Numismatic Collections, the Galleries of Drawings and Prints, and the Sculpture and Plaster Cast Collections.

The Castle also hosts two other important cultural facilities open to the public: the Biblioteca d’Arte (art library), which holds over 45,000 books and approximately 350 periodicals and the Fototeca (photo library) which houses more than 180,000 images including photographs, negatives and original plates.

What one can see at the top of the hill today is an imposing sixteenth-century construction, built following the devastating earthquake of 26 March, 1511, which was to cause the partial collapse of earlier buildings. The immediate need to rebuild part of the castle quickly transformed into a complete renovation project entrusted to the architect Giovanni Fontana from Lombardy, who was active in Venice at the time. Work proceeded at a brisk pace, with some 500 labourers employed on the project. The laying of the foundation stone took place on 2 April, 1517. After this initial momentum, however, the pace of building works slowed down, mostly due to the difficulty of obtaining funds, and the architect's original project was never completed.

Other architects took over the construction, among them Giovanni da Udine, who in 1547 planned an external staircase on the northern side of the courtyard to allow access to the central hall. A third project phase was marked by the arrival of Francesco Floreani, who in 1566 completed some works in the Salone del Parlamento. Work on the vast interior was concluded by the end of the year, thereby establishing a venue for the city’s most prestigious events, and soon work on the pictorial decoration scheme - a veritable anthology of mid-sixteenth-century Friuli painting - was underway.

In 1576, an internal staircase was built to connect the hall to the Salone del Parlamento, thus completing the main features of the new palace-castle. Later works completed at the beginning of the seventeenth century, would have no significant impact on the original sixteenth-century structure.

The City Museums (Civici Musei) located in the castle complex host a partially exhibited collection of sculptures and nineteenth-century plaster casts. In the Art gallery (Pinacoteca) one can find  fifteenth and sixteenth-century terracotta tabernacles of the Tuscan school,  a precious bas-relief stucco work created in the fifteenth century by Giovanni da Udine (1487-1561), a sixteenth- century terracotta bust of Tiberius Deciani realized by Francesco Segala (? - 1593?), and a seventeenth-century plaster bust of Fra Paolo Sarpi by Filippo Parodi (1630-1702).

Among the works of the nineteenth century inspired by historical mythological and allegorical themes, it is worth noting the sculptures of Vincenzo Luccardi (1808-1876), Andrea Flaibani (1846-1897) and Leonardo Liso (1855-1922). Also worthy of special mention is the Fondo Mistruzzi collection currently held in the deposits of the provincial authorities, which boasts 306 plaster casts by the celebrated sculptor Aurelio Mistruzzi (1880-1960).

Sculptures from the highly prized Luigi e Andreina Ciceri collection, donated in 1985, date back to between the fourteenth and eighteenth century, and can be viewed at the Museo Etnografico del Friuli (not part of the castle complex).

02.GALLERY OF DRAWINGS AND PRINTS

The gallery, which forms part of the Castle’s museum complex, boasts a substantial collection of drawings and antique prints.  Originally formed during the nineteenth-century, thanks to several generous donations, the collection has grown over the years and continues to do so. It currently holds over 2,000 drawings, most from the 1800s and 1900s, although there are also a few examples from previous eras. The oldest of these date back to the sixteenth-century, with some attributed to Domenico Campagnola, Luca Cambiaso and Agostino Carracci, while others were realized by local artists, such as Pomponio Amalteo. The work of Venetian artists of the seventeenth and eighteenth-centuries is also well represented, including a significant number or works by Giambattista and Giandomenico Tiepolo. Among the nineteenth-century drawings on display, there are works by local artists such as Odorico Politi and Filippo Giuseppini.

The collection also contains over 3000 prints dated between 1500 and 1800. These depict a variety of subjects and include prints of original works by famous painters, prints of works realized by other artists interpreting famous works, vedute and geographic maps. Among the artists represented, the names of Albrecht Dürer, Rembrandt and Giambattista and Giandomenico Tiepolo stand out.

The numismatic collections, which currently number more than 50,000 pieces including coins, medals and seals, were added to the museum’s holdings at different junctures and were acquired in various ways. The major Cigoi-Del Negro-Tartagna collections were donated to the museum in 1875 and later augmented by those of Count Augusto De Brandis, Marquis Rudolph di Colloredo Mels, Count Leonardo Manin and Count Francesco Antonini. These donations enriched the collections of ancient and modern coins and include some important examples of Italian and international twentieth-century coinage, also well represented in the recent Straulino bequest. In addition, there are several hundred coins that were discovered during excavation work or were the result of fortuitous discoveries made in and around Friuli-Venezia Giulia.

All artefacts are now in storage, but are available to view on request.

The museum deposits are home to a splendid collection of western and oriental weapons originating from all corners of the world, most of which were bequeathed to the city’s museums by the collector Giuliano Mauroner (1846-1919), A doctor from Friuli, Mauroner built up the collection whilst living in Florence, gradually amassing a rich assortment of artefacts, including weapons, paintings, liturgical ornaments, sculptures, musical instruments, and furniture. The armoury consists of sidearms, firearms and armour produced between the sixteenth and seventeenth centuries, and includes a variety of pole arms such as halberds and corseques, swords of varying shapes and sizes, not to mention a wealth of firearms including arquebuses, blunderbusses and pistols.

The oriental pieces, with their curious symbolic meanings and unusual manufacture, are among the most fascinating exhibits. The Japanese and Indonesian collection consists of various types of armour, lances, swords and daggers, while the Islamic collection boasts valuable items decorated with inlays of precious materials.