10 May - 9 June 2017
University of Udine, Polytechnic Department of Engineering and Architecture

China will be the protagonist of the 2017 edition of Paradoxa, a three-year project which started a year ago with the aim of investigating the current forms of contemporary Far Eastern art, produced by the City of Udine - Civic Museums, organised by ERPaC, Regional Agency for Cultural Heritage, sponsored by the University of Udine and edited by Denis Viva. Three Chinese artists, Cheng Ran, Chen Wei and Xie Nanxing, already established on an international level, will exhibit in Udine from April 22 to August 27, 2017 at Casa Cavazzini, Museum of Modern and Contemporary Art, their painting, photography and video art works with darkness as their leading theme.

For 19 years the city of Udine has hosted the Far East Film Festival, Europe's largest Asian film festival, and the exhibition will cut the ribbon in the same days of this great event (21-29 April 2017).

That of 2017 is shaping up to be a very intimate and curious edition with a semi-darkness construction, made in collaboration with the lighting artist Ludovico Bomben, from Pordenone, which has the aim of causing an initial loss of spatial reference points to which the viewer adapts after a few minutes spent inside the halls.
Based on the theme of paradox, of counterintuitive thinking and contradiction, each edition of Paradoxa explores a national exhibition context and a single theme: after the manipulation of objects and everyday life, which were the focus of the exhibition on Japan in 2016, the edition on China has chosen to probe the darkness theme in Chinese art and culture. This theme, which has always been an essential and indispensable part of reality, is one of the classic oriental themes, it is associated with the bipolar foundations of philosophical and religious culture of the country.

The use of light, sometimes dim, almost crepuscular and sometimes intense and almost blinding, and its alter ego, darkness, become essential expressive elements that allow artists to keep, on the one hand, the link with tradition and, on the other, a more uneasy view, a greater intimacy that contrasts with a bright future and with the collectivism often associated with Chinese art. This is the common feature of the works of the three young, mid-career artists of the dragon country present at the exhibition.

Xie Nanxing (1970) achieves his pictorial image after several complex steps: the subject is filmed, transmitted on a television screen, photographed during the emission so that the reflections of the environment on the monitor are captured with it and finally painted on huge canvases with oil painting.
The resulting image is difficult to interpret and is only revealed when the eye is accustomed to the darkness.

Also for Chen Wei (1980), who is among the most influential, young, current, Chinese photographer artists, the development of the photographic work is a painstaking process. He doesn't capture the situations he finds, but rather searches for objects, people or conditions that stimulate his interest. He then places them in his study and stages them in enigmatic scenes, built with extreme minuteness and scrupulousness. The results are timeless photographs, with calibrated effects of light and darkness, where reality appears to be suspended.

The work of video artist Cheng Ran (1981) is characterised by a mysterious and sometimes cinematographic approach towards the image. In the work of this artist, there are layers of cultural references taken from film, music, literature and poetry, quotes or speeches by famous people and from art of the Western world. The placement of these references, created by others, within his own narratives, causes a slippage or a manipulation of some aspects, and it’s a device for Cheng Ran to redirect the disoriented spectator towards the work of art. Also for him, light and its alternation with darkness is an expedient for the composition of intricate scenes: an example is Rock Dove (2009), where a small flock of birds is struggling under a cold neon lighting.

Cheng Ran will also have a video installation on show at the University of Udine, on the second floor of the Polytechnic Department of Engineering and Architecture, in which the film "In course of the miraculous" (2015) will be screened (untile June 9).

Paradoxa is produced by the City of Udine - Civic Museums and organised by ERPaC, Regional Agency for Cultural Heritage 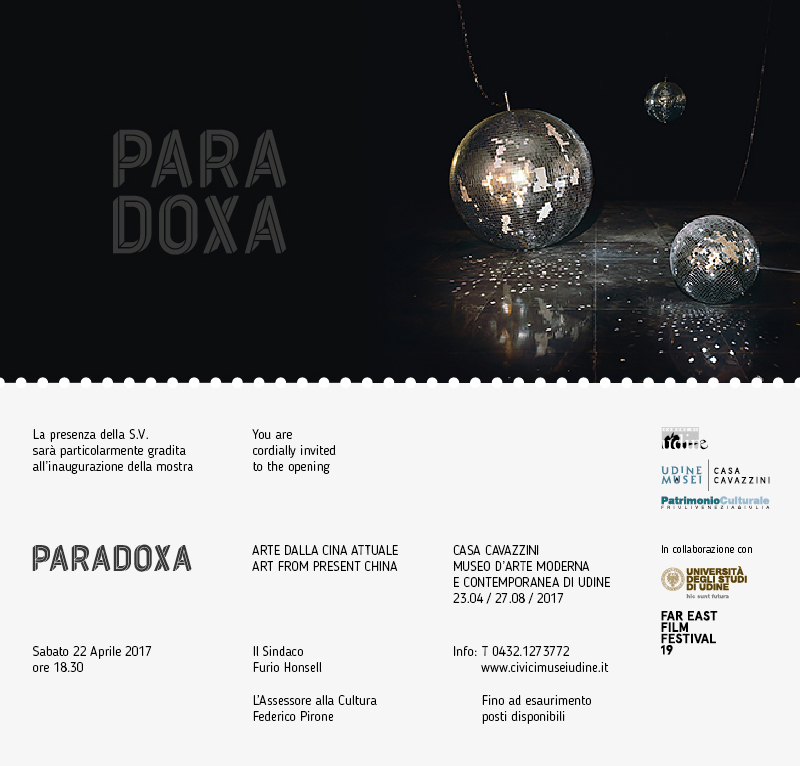